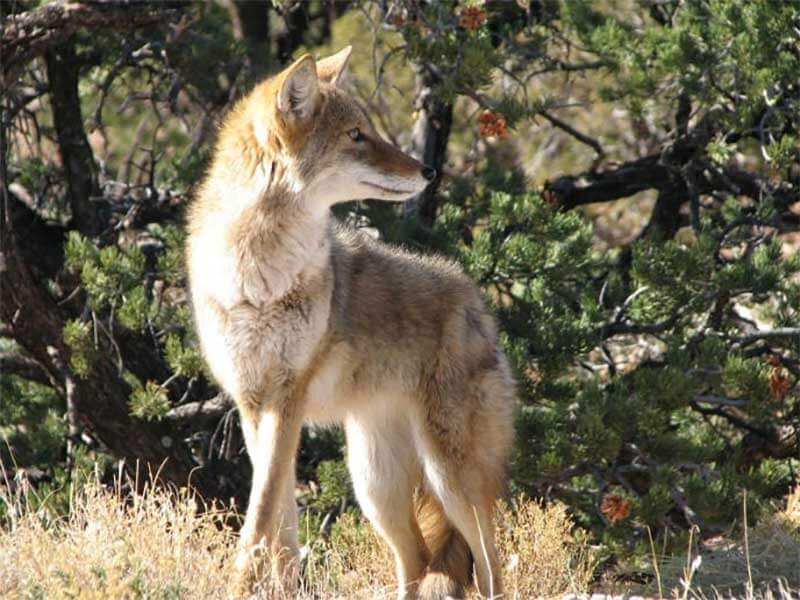 When trying to study the best time to hunt coyotes there are several factors that need to be considered. Temperature and climate, for example, can often dictate when these canines are most active, and the availability (or unavailability) of food sources at different times of the year can also alter their movement patterns.

In this brief article we will dig a little deeper into the question “when is the best time to hunt coyotes?” Specifically, we will discuss the movement, feeding and sleeping patterns of coyotes at different times of the year—seasonally—and discuss the same movement, resting and feeding patterns at different times of the day, from very early in the morning into the wee hours of the night.

As most experienced hunters know, different seasons are definitely better for hunting certain animals. This is especially true of the coyote, which has a very diverse movement and feeding schedule depending on the time of the year—the season. To illustrate this, below we will take a closer look at each season in terms of coyote hunting, beginning with the season of spring.

Hunting Coyotes in the Spring

The coyote, like any member of the canine family of animals (wolves, foxes and even dogs) is a very territorial animal. It is even more territorial in the spring, when many of the species begin working on dens to assert their presence in a given area.

Because of this, the best way to attract coyotes in the spring is to use coyote vocals—trying to draw the coyote out by mimicking its howl. You can also try recreating the sound of a prey animal in distress; however this is not as effective as the coyote vocals during this season.

Once you learn to “howl in” a coyote, the spring time can make for a very good time to hunt them. However, learning this call can be a challenge and may take a while to master or perfect. Experts urge you to be very patient when hunting at this time of year.

If you know coyotes are in the area, try to sit and/or stand a bit more motionless than you normally would. However, do not stand or sit in one place for longer than 30 minutes unless you are working a coyote that you can actually hear nearby.

Hunting Coyotes in the Summer

As with most hunted predator animals, the beginning of the summer signals a slow time for hunting coyotes. Food sources are scarce in the summer, and because of this, most coyotes spend most of the daylight hours holed up in dens to beat the heat.

Some hunters have found success in the summertime by hunting with a pair of decoy dogs or through other tactics, but these opportunities are few and far between. This is a time when the females are most likely nursing, so unless your goal is to kill off a whole litter of pups this is really not a good time period to be hunting.

An exception to this rule is when you are hunting nuisance coyotes for a farmer or rancher—someone who wants to rid coyotes from their property. If this is the case, it’s best to set up around ranch claves and wait for them to come. Other than this purpose, you might just want to pack up your hunting rifle for the season and grab your fishing rod instead.

Hunting Coyotes in the Fall

After a great summer season of big trophy trout, it’s time to grab that rifle again and get busy. Simply put, fall is one of the best times to hunt coyotes (and many other species), as most are searching for food after the long, hot summer.

In the fall, the weather is ideal for coyote hunting and they are anxious to be called. The young pups from the litter are now out on their own and you are bound to find some success with young coyotes that have yet to learn the ropes.

In this season, the best calls to use are signs of a prey animal in distress. Coyotes are extra hungry in the fall, which is why these carnivores seem to come willingly to the sound of a potential meal.

Hunting Coyotes in the Winter

Finally, we come to the winter season. It is in this season that most of the larger predator animals tend to target coyotes. With their pelts heavily furred, coyotes are spending more time outside during the winter daylight hours hunting for food, which can make them easy targets for you, the hunter, if you are patient.

The winter weather makes coyotes more active, yet the food becomes scarce, which translates to longer hours spent hunting. During the winter it is fairly easy to get a coyote to respond to an “animal in distress” call, such as a rabbit, but you should also keep in mind the four instinctual areas that will typically lure a coyote to your call—Curiosity, Hunger, Territorial, and Paternal Instincts—and begin practicing some calls that will generate interest in each of these areas.

As you learned in the section above, the two best seasons for hunting coyotes are probably fall and winter. However, your hunting does not have to be limited to those times once you perfect your calling skills. Now we will switch gears a little and talk instead about the “best time of day to hunt coyotes,” starting with the early morning.

If you truly want to be a successful coyote hunter you will need to learn to hunt in the early morning. Coyotes, like many animals, are most active early in the morning and late in the day.

During the early morning, coyotes will respond to a distinct siren or howl, which is why many of the world’s best coyote hunters hit their stands in the predawn hours and start in with one of three calls: the locator call, group howl, or interrogation howl.

Once you have their attention with one of these howls, wait about three or four minutes and continue with a “prey in distress” howl or another type of vocal depending on the time of the year.

Late morning, at least in the hunting world, covers the period from between 8:00 AM to 11:00 AM. This is also a great time to hunt, as the coyotes just seem to respond better in the morning than at any other time of day.

Make sure to have your hunting spots picked out and your patience hats on and try to bag as many as you can during the morning period. This just might be the best time you will have to hunt all day so it pays off to be alert during this time.

Come about noontime, coyote hunting becomes much more challenging, but that does not mean it is impossible to get a coyote during this time of the day. Remember that coyotes are opportunists, so even if it breaks with their normal schedule they just might come running if they perceive a free meal of some kind.

In the afternoon, proper scouting, good locations and good setups will make all the difference in your success or failure in the hunt. As long as you have learned your calls and are okay with practicing a lot of patience you can score big points in the afternoon.

The problem with most hunters is that they tend to get lazy in the afternoon. As such, they fail to check the wind, they setup in the sun, etc.—all of which are taboo when hunting coyote.

The evening represents the last chance a hunter has to call in a coyote. In the late afternoon and through dusk, coyotes tend to be very active and your chances of successfully calling one in go up dramatically.

As evening begins to set in, your best bet is to pick a good stand in a good location and prepare to spend about 30-60 minutes at the end of your hunting day just waiting patiently after your calls. If you can do this, you are sure to be successful more often than not.

Finally, let us talk a little bit about the moon phases and what they mean. Many people have said that it is impossible to call a coyote in the daytime during a full moon. This is simply not true.

With the right calls, a coyote will come on a full moon, a waxing crescent, a waning crescent, and no moon at all. Of course, a full moon can make things a bit more difficult because the coyotes see so well at night, and night hunting for them means they will have a full belly by daylight.

However, this rule does not always hold true. Every coyote is different and if your calls have been mastered they can be called and hunted at any time of day regardless of the phase of the moon.