You are here: Home / Defense + Security / How to Use a Gun: Basic Tips for Beginners 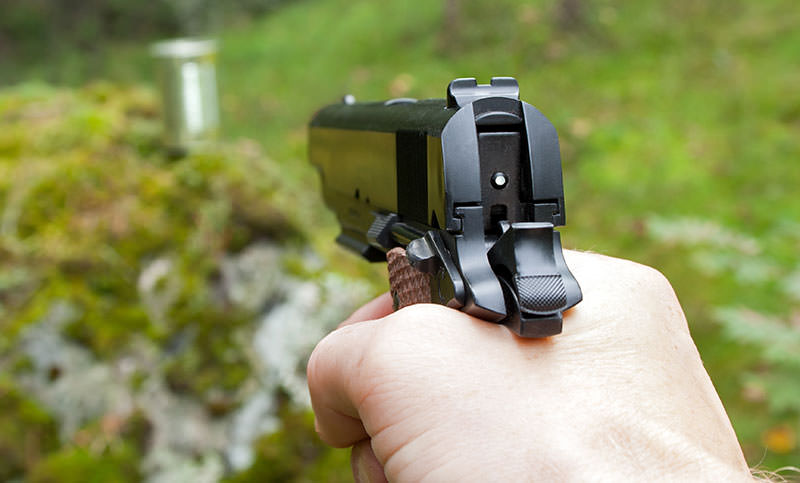 Using a gun—for things like target practice and hunting—can be tremendously enjoyable, but guns can also be very, very dangerous in inexperienced hands.  Using a gun is a huge responsibility, and despite what you may have seen on the big and small screen, learning how to properly handle and shoot a gun requires a lot of knowledge, skill, maturity and practice—lots and lots of practice.

As a new shooter just starting out, you have the incredible opportunity to learn how to handle, shoot and care for a gun properly, without making some of the potentially deadly mistakes that have led to thousands of injuries and deaths over the years.  To help ensure that you completely master the art of gun safety, care and marksmanship, below we have outlined a series of helpful gun tips for beginners, with a brief description detailing why each of these tips should ALWAYS be followed.

To help you get a better grasp on each of these gun safety rules, below we have elaborated and underscored the importance of each of them.

This first rule of gun safety is definitely the most important.  Whenever you see or handle a gun, regardless of the type, you must always assume that gun is loaded and ready to be fired—always.  Hundreds of accidents, some fatal, occur each year in which the person causing the gun accident erroneously assumed the gun was not loaded.  From hunting accidents to small children who come across a family gun in the home while playing, these tragedies can be avoided by following this simple rule.  Even if you just checked the gun a few days ago to find it empty, you must NOW assume that it IS loaded.  Anytime you pick up a gun, check to see if there is any ammunition in the gun and/or chamber, then check it again.  It is definitely worth the extra time.

Gun Safety Rule 2:  Never Point Your Gun at Anything or Anybody You Do Not Wish to Destroy or Kill

While modern pistols (handguns) and rifles are fairly safe in the right hands, accidents do occasionally happen with these weapons—and these accidents can be tragic and even deadly.  For that reason, it’s important that you never, EVER, point your gun at anything or anybody you do not wish to destroy or kill.

There are hundreds of reported incidences each year of accidental gun violence—incidences that have tragically left many families in ruin, mourning someone they love.  Phrases such as “I was only joking around,” or “I had no idea the gun was even loaded,” while common in these instances, unfortunately ring hollow in the ears of these family members, all of whom have been torn apart by someone who was holding a gun improperly.  Guns are designed to stop and kill. Period. They are not toys—and thus should never be pointed at anything or anyone you cannot stand to lose FOREVER.

Gun Safety Rule 3:  Never Put Your Finger on the Trigger until You Are Ready to Fire

If you watch many of today’s TV cop shows or westerns, you may have noticed that many of the actors and actresses seem to draw or hold their weapons with their fingers on the trigger.  This is a huge No-No—something that should never be done.

When holding a weapon, your trigger finger should be completely off the trigger mechanism until you are absolutely ready to fire the gun.  Moreover, after you fire the gun, you should immediately remove your finger from the trigger to avoid shooting a second time—a tip that far too many shooting range instructors have been forced to give participants who are shooting at targets.

When drawing a weapon from a holster of any kind, your finger should also be OFF the trigger until you are ready to fire.  Failure to heed this advice may cause you to shoot yourself or an innocent person.

Gun Safety Rule 4:  Always Know Your Target and What Is Beyond and Around It

Properly shooting a real gun—with real bullets—takes a great deal of focus and attention to detail.  As the shooter, you must always survey everything around you before you even think about firing the gun.

When shooting at cans or targets, for example, be aware that a bullet can potentially travel for several miles, possibly endangering someone or something well beyond or around the intended target.  The same rule holds true for hunting and in those rare instances when you might have to take aim at a bad guy.  Whenever possible, you must fully consider any innocent people behind your target that could potentially be injured or even killed by an errant shot.

Following these four basic rules of gun safety can help you enjoy and responsibly use your weapon without jeopardizing the lives and welfare of other individuals.

Familiarize Yourself with Your Gun

Knowing the different parts of a gun—what they are and what they do—is an important part of gun ownership and can also help avoid unnecessary injuries and accidents.  All guns, regardless of type, have three basic components to them: the action, the stock and the barrel.

The “Action” of a gun can best be described as the guts of the gun.  This terms encompasses all of the gun’s moving parts—the parts responsible for loading and firing the gun, and for ejecting the spent cartridges or shells.

The “Stock” of the gun is essentially the handle—the part you hold.  It can be further separated into two parts—the butt of the gun and the fore-end.

Beyond the three MAIN parts of a rifle, handgun or shotgun, there are scores of different parts you can learn about along the way.  A few of these parts include the:

Use the Correct Ammunition

Using the proper and recommended ammunition for your handgun or rifle is crucial.  The wrong ammunition can quickly ruin or severely damage your weapon.  It can also endanger your safety, as your gun is only designed to fire a certain caliber and type of bullets.  In most cases, the caliber of the gun can be found somewhere on the body of the gun—usually on the barrel or within the ejection chamber.  However, if you are uncertain as to what type of bullets/ammunition you should place in your gun, it is imperative that you check your gun’s user’s manual, or speak to a professional at the location where you usually purchase your ammunition.

A qualified shooting instructor can usually be found at your local shooting range or gun store.  Be sure to select someone whose opinion you trust, and listen to everything he or she has to say about your weapon and the manner in which you should be using it.  This can help you avoid some of the common mistakes many first-time gun owners/shooters make, and make you and the general public that much safer.

When gripping a gun in preparation of firing it, there are many things you need to know and understand to ensure both your safety and the safety of others.  For each type of gun, there is a proper and improper way to hold it.  Different gun types will determine different types of grips—grips that will help you avoid injury.

When shooting a semi-automatic gun, for example, you will notice a slide that rapidly ricochets back when the gun is fired.  Because of this slide action, if you happen to have your thumb placed behind the gun, you just may suffer a broken thumb or lose that digit altogether.  On a revolver, there is a small gap between the chamber and cylinder that gets extremely hot after it is fired.  Place your finger there while shooting a revolver and you are sure to get burned.

Most guns also have some type of kick when they are fired—a motion that pushes the gun towards the shooter as it is being fired.  You will need to prepare for this kick.  Should you hold the gun too close to your face, the kick can cause the gun to snap back and injure your face, or even knock you completely off balance if you are not ready for it.

So remember, regardless of the type of gun you have, there is a right way and a wrong way to hold it—and the wrong way can cause a great deal of injury if  you are not careful.

Remember There Is Always More to Learn

When most people buy a gun, they take it to the shooting range a couple times, get accustomed to the way it fires, and then they assume they have learned everything they need to know.  This is just not true.  Regardless of how many hours you have logged at the shooting range, there is always room for improvement; always more to learn.  Keep an open mind and listen to those with more shooting experience than you possess.  Do some research on the type of gun you own and how it should be shot.  Study up on storage and cleaning tips that will keep your weapon in top working order.  The more you know the better prepared you will be—and the better prepared you are, the less chance of accidental injury.

Like with any activity, the best way to become a proficient shooter is to practice, practice, practice.  With your instructor, use your time at the range to practice shooting your weapon correctly from different distances.  Find a comfortable and safe grip that works best for you, and practice different stances until you find one that is both comfortable and safe.  Continue to ask questions about the various parts of your gun and what they do.  This is the best way to become a marksman.

Other things you should practice include loading and unloading your gun—the correct way.  This is a vital skill of gun ownership.  Whether you buy a revolver or a semi-automatic-style gun, these repetitions will help you become better skilled and more knowledgeable regarding the inner workings of your gun.

Practice dry-firing the gun, or shooting the gun without any ammunition.  This is a safe way to work on things like your grip and your stance without any potentially harmful bullets to worry about.  When dry-firing your gun, you can also determine which one of your eyes is the “dominant eye”—the eye that will remain open when aiming and firing the gun.

When you are ready to fire live rounds, try practicing with different types of targets placed at various distances.  This can sharpen your aim and help you learn how your gun is going to react each time it is fired.  All of these practice skills can help you eventually master your new weapon, and feel safe and completely comfortable when using it.