You are here: Home / Food / How Long Do MREs Last? 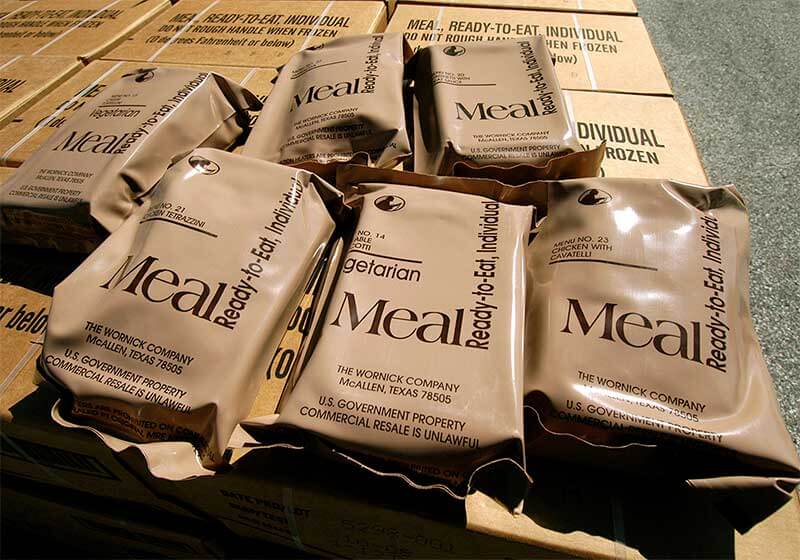 Just how long do MREs last? Do you know? Do you even know what an MRE is or what is in these little packages? It’s okay if you don’t. In fact, most people don’t; but if you are ever involved in some type of disaster you’ll be glad you stumbled across this brief article.

Here we will discuss not only how long MREs last, but we will also define what an MRE is, why they are such an important “prepper” item, and what typically comes in these pre-packaged cans or boxes of goodies.

What Is an MRE?

An MRE is an acronym for Meal, Ready to Eat. They were originally designed and made for the United States military, but there are now civilian versions of the MRE that many people are buying in preparation for a natural or manmade disaster.

In their original form, they were designed to be self-contained packages that can sustain a soldier in the field—sustain him when there are no food service facilities available or no ready-made food sources. To date, there are 24 different varieties of military MRE meals.

Together they contain a variety of different foods, including an entrée of some type and various other food items like spices, cheese spreads, peanut butter, snack foods, and, in some cases, even food heaters.

The sale of military MREs is highly restricted by the military. Still, there are many non-authorized dealers on places like E-Bay that peddle military style MREs, usually to preppers who are stockpiling food just in case of an emergency. Fortunately, this is no longer a necessity, as many companies have begun making civilian versions of the MRE—self-contained packages of food that are perfect for emergencies.

While stocking up on military MREs may seem like a quick and easy way to grow your emergency food supply, there are a number of reasons that you may be better off buying civilian MREs instead of their U.S. military counterpart. Some of these reasons include:

There is definitely something to be said for knowing exactly where your MRE supply came from and when it was manufactured. According to some sources, many military MREs have sat in war zones for months or even years before making their way on to eBay and other like sites.

In addition to what is in the MRE, you must also consider what may be on them. In war zones, there is plenty of stuff going on, and many of those tasks involve some pretty nasty chemicals that can adhere to a lot of products.

There is a school of thought that says many of the “mysterious illnesses” that have befallen some of our war veterans may be due to some of these chemicals. With that in mind, is eating a military MRE, just to be more “genuine,” really worth the risk?

You should also consider the quality of a civilian MRE versus the quality of a military MRE. Civilian food companies must adhere to strict guidelines when it comes to food quality and safety, and could open themselves up to lawsuits should the product or products they sell not meet those specific guidelines.

With the military, however, there is no such worry. The quality of everything the military gets is usually dependent on some special interest group who won a no-bid contract for that item. In fact, the quality of a lot of equipment and military gear has gotten so bad over the years that many service members have been forced to buy their own gear. Again, with that in mind, is it really worth the risk?

Finally, you should think really long and hard before buying military MREs on the illegal marketplace because you are opening yourself up to the possibility of purchasing counterfeit products with no chance for any legal remedy (because they were purchased illegally). Many of the MREs found online are not worth the package they are contained within, and may not be military MREs at all. Do you really want to include these products in your emergency food supply?

What Is In a Traditional MRE?

While the civilian MREs sold today contain a wide variety of healthy foods that are chock full of healthy minerals and vitamins, you will not get the same healthy selection from a military MRE. So what is in your typical military MRE?

To give you an example, the average MRE contains about 1300 calories—not a lot, but certainly enough to survive on. The Chili with Beans military MRE has 1,291 calories (36 grams of protein, 83 percent fat and 177 grams of carbohydrates) and only about half of the military’s recommended daily allowance (RDA) of vitamins and minerals.

How Long Do MREs Last?

Finally, we arrive at our title question: “how long do MREs last?” While civilian MREs have shelf lives that are boldly indicated on their package, if you have ever looked at a military MRE you will notice that they do not contain any traditional expiration or “eat before” dates.

This can be very problematic. After all, how do you determine the shelf life of these MREs if there is no expiration date on the package? Actually, there is one way to do it, assuming you can still read the numbers on the container.

Most of the time, you can determine the manufactured date of an MRE by looking for a series of numbers on the package. The first number of the series represents the year in which it was packaged. So you can definitely determine the year it was made, but how do you know how long from that year it will actually last and still be edible and safe to eat?

Provided that the MRE is not damaged, dented or punctured, you can assume it will last quite a long time from the year it was made. According to the Army’s Natick Research Laboratory, which tested MREs made in the early 1980s to the early 1990s, an MRE from that time, one that was stored below 60 degrees, has a shelf life of about 130 months.

That is certainly a long time, but what about the newer MREs? Can we assume they have even a longer shelf life? Actually, the opposite is true. In testing MREs that were made more recently, the same laboratory discovered they have a shelf life of approximately 60 months when stored at 60 degrees—less than half of that of the older MREs.

On top of this, any fluctuation in storage temperature can and will affect the shelf life of your MRE. For instance, the same MRE stored at 100 degrees has a shelf life of only about 6 months—not exactly the most efficient prepper supply.

While stockpiling military MREs may sound like a good idea, the truth is that you really don’t know what you are going to get with these unauthorized purchases. At best, you may find that the food is spoiled or that you just purchased a counterfeit product, and at worst you may actually bring harm to yourself.

Therefore, if you intend to stockpile food and supplies—which is always a good “just in case” idea—we highly recommend that you turn to some of the civilian MREs that are being manufactured today instead of the illegal military MREs.

At least this way you will know that someone is monitoring the quality and safety of this food. Plus, you will never again have to worry and wonder about the shelf life of the MRE, mainly because it is clearly written on the package.