You are here: Home / Outdoors / Hunting / Night Vision vs Thermal Imaging: Which Is Better For Hunters? 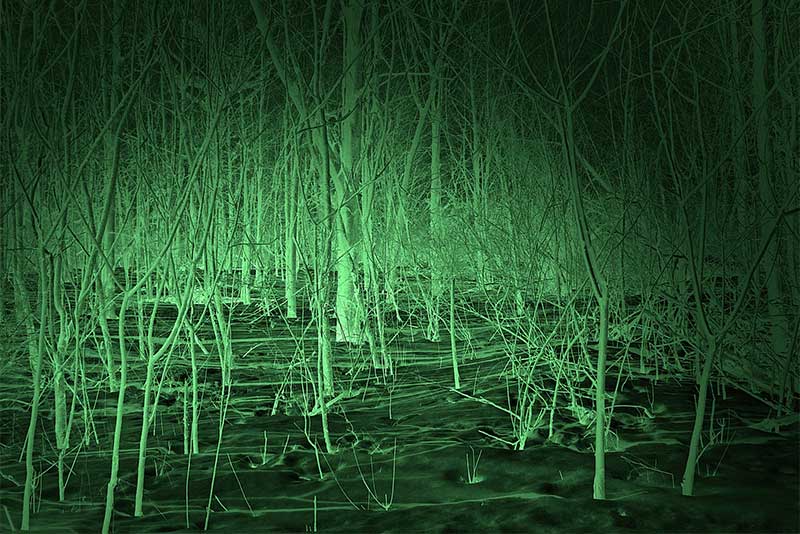 In the regions of the country where it is now allowed, hunting after dark has become a popular pastime for sportsmen. Darkness is a mitigating factor that goes a long way toward evening the odds between hunter and prey.

While most game animals have very good night vision, we as humans do not, a fact that truly ups the challenge when hunting after dark. To help even the odds and level the playing field, some hunters are turning to technology to allow them to better see images in the darkness of night.

What Is Night Vision?

A night vision scope is a scope that transmits ambient or available light. It does not, as some manufacturers claim, “gather” light in any way. Some night vision scopes are better than others at transmitting light, as this ability is highly dependent on optical quality such as glass and coatings.

However, electricity can provide a significant boost in a scope’s ability to transmit what little light is available, such as that from the moon or a star. This is why night vision scopes are often referred to as Starlight Scopes.

Shaped just like regular rifle scopes, a night vision scope includes a power source to produce a highly intensified green or black and white image. Night vision scopes can provide hunters with an image that is 20,000 to 50,000 times brighter than what they would see with the naked eye.

Night vision technology has been around for several decades and has improved dramatically in recent years thanks to new technologies and methods. Some night vision devices work so well that it is illegal to export them outside of the United States for fear they will get into the wrong hands.

How Do Night Vision Scopes Work?

Now that you know how night vision scopes work, you may be wondering why the images on these scopes are always green. Fortunately, there is a good explanation for this.

Even after nightfall, the photons that originally come into the scope are made up of light of all colors. However, once these photons are electrically transformed into electrons there is no way to preserve that color information.

Thus, what were originally colored images are now expressed in black and white. So, you might be saying, why are the images we see not black and white but rather green? Well, that’s because the phosphor screens in most night vision scopes are chosen to deliberately make green pictures—a color to which are eyes are most sensitive.

It is also much easier to look at green screens for extended periods of time than to look at black and white images, which is why many of the early computers had base green screens. Because of this, most night vision scopes today will produce that spooky green glow you have come to know.

What Is Thermal Imaging

Thermal imaging scopes display images that demonstrate heat. In other words, a thermal imaging scope on a rifle will effectively translate heat—or thermal energy—into visible light as a way to analyze the surroundings. This ability makes them very useful indeed for plenty of applications.

Living things like humans and animals, as well as mechanical equipment, put out heat. This makes them visible to thermal imaging scopes in the dark. In fact, some thermal imaging devices are so powerful and precise that they require just a tiny amount of heat to work.

How Do Thermal Imaging Scopes Work?

Visible light—the type of light we see everyday—is extremely important to our survival, our happiness, etc. However, visible light is only a small portion of the total electromagnetic spectrum.

Infrared radiation, the type of radiation produced by heat, actually takes up much more of the total electromagnetic spectrum than does visible light. The interplay of heat being absorbed, reflected and in this case transmitted is what thermal imaging scopes capture and study. In terms of hunting, you can see how this would be very valuable, allowing you to pick up the very heat of an animal and have it portrayed in the form of an image.

The level or amount of thermal radiation emitted by an object is called its heat signature. The hotter a given object is, the more radiation it will spill into the environment.

The thermal imager is capable of distinguishing heat sources and very small differences in thermal radiation. It compiles this information into a comprehensive “heat map” that is distinguished by heat levels. This is what allows these scopes to differentiate between different objects.

Night Vision vs. Thermal Imaging: Which Should Hunters Use?

Now that you have a better idea of what both night vision and thermal imaging are and how each of them work, let’s take a look at which technology is better for hunters. Of course, for most this comes down to a matter of preference, so let’s explore this question in terms of a couple of different categories: dual-use (daytime) and prey identification in the dark.

Dual Use: Day and Night

As you now know, both night vision technology and thermal imaging scopes are primarily designed for use at night. During the daytime hunters rely more on their own daytime vision and instincts, but there may be times when you decide to use either your night vision scope or thermal imaging scope to confirm the positive identification of your prey before taking the shot, regardless of lighting conditions.

Identifying Prey in the Dark

When it comes to identifying prey in the dark, the night vision scope probably has a small edge. Although it does depend on a small amount of ambient moonlight or starlight to produce an image, a detailed image of your prey can usually be produced by the night vision scope, allowing you to see exactly what type of animal you are looking at and even making out some other details.

A thermal imaging scope will do a great job at “detecting” prey based on its heat signature, but it is not capable of producing a detailed image in which you can identify the face or other minor characteristics of the animal.

If you will be using your scope primarily for night hunting, in which identifying your prey is an absolute must, a high-quality night vision scope is absolutely the best choice. A high quality night vision scope, unlike a thermal imaging scope that offers just masses of color, will provide superior resolution and image quality for prey identification.

And finally, not only is night vision technology much better for identifying prey in the dark, it is also much more widely available than thermal technology, more affordable, and equally as durable atop a rifle, able to handle a 30-caliber recoil with no problem whatsoever.