You are here: Home / Outdoors / Fishing / What Do Catfish Eat? 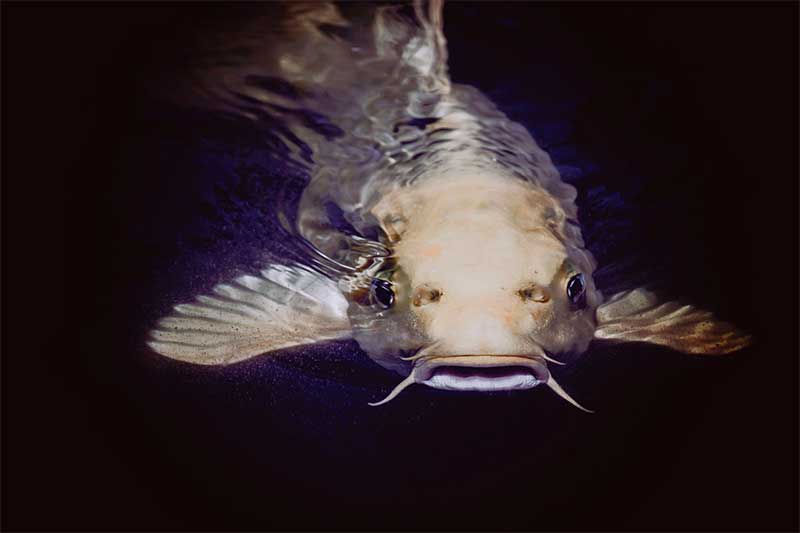 If you live in certain parts of the country where catfish are part of the regular gastronomy, you already know they are quite delicious to eat. Many a fish fry, from the shores of California to the plains of Texas to any number of the small hamlets of Alabama, regularly feature catfish as the main dish and prime attraction, making catfish one of the most consumed types of fish in the United States and beyond.

However, before you can enjoy one of these down home fish fries, you first must have the ability to catch the critters. And to do that, you will need to have some knowledge about their regular diet—what they normally eat in the course of their day.

To give you a better idea regarding the usual diet of the catfish, below we have provided some information on exactly what catfish eat, from the very young catfish to the more mature species to those that are raised on a fish farm of some kind.

A Little about the Catfish

Known for their long whiskers, which are actually known as “barbells,” catfish are a very prevalent freshwater fish. With nearly 3,000 living catfish species, catfish make up one of the most species-rich vertebrate order of fish on the planet, an order known as Siluriformes. From a global perspective, about one out of every four freshwater fish—a full one-quarter of them—is a catfish of some type; and one out of every twenty vertebrates is also a species of catfish—a lot to say the least.

In terms of size, the many species of catfish are quite varied. Some, such as the gigantic European Wels variety of catfish, also known as the Silurus Glanis, can grow to be longer than 15 feet in length and weigh several hundred pounds; while on the smaller side of the catfish size spectrum, you have the Banjo Catfish, or the Aspredinidae, which typically maxes out at roughly 1 inch in length or smaller.

As a fisherman, there are literally hundreds of species of catfish that you may encounter on your fishing adventure. Channel cats, Flathead catfish and Bullheads are just three of the most common types that inhabit the waters around the United States. To be exact, catfish are a very diverse group of fish, and they demonstrate a wide amount of diversity in their feeding behaviors as well.

Of course, catfish, despite the type, are known to be very opportunistic feeders. Some are omnivores, eating a mixture of plant life and animal life, while others lean toward plant or meat diets exclusively. Many species can be grouped as scavengers or herbivores, and a select few species can grow into enormous creatures, feeding only on fish while swallowing them mostly whole.

Catfish are known to seek food almost anywhere in a freshwater environment. Some stick to the water column, from the surface of the water to the deepest depths; while others are mostly bottom-feeders, taking advantage of their amazing sense of smell.

Catfish boast odor-detecting organs at a very high concentration and taste buds along the length of their bodies that help them locate food in even the muddiest and unclear water conditions, where visibility is exceedingly low. They also have a tremendous sense of smell that allows them to find food almost anywhere in the water.

This is why many catfish anglers use very pungent baits to attract the fish, baits such as cut mackerel, chicken livers, garlic-laced baits and other so-called “stink baits” with a noticeable odor.

When fishing for younger catfish you have to employ a separate strategy than you would for the mature adults. Although he may actually eat a few of the just-laid eggs from the female, the male catfish does a pretty good job at protecting those eggs until they are ready to hatch, guarding the nest and scaring off any scavengers looking for an easy meal.

Once the young catfish have hatched, the male adult catfish will continue to watch over the young fish and feed them when needed. However, over time, when they are strong enough, it will be time for them to go out and begin searching for their own food.

Before catfish grow and reach maturity, they tend to search for and consumer foods that they can easily capture and eat. Foods like worms and small invertebrates—animals that lack a backbone—fall into this category of easily caught and digestible foods and thus are a prime source of a young catfish diet.

Other foods that fall into this categorization include the aquatic larvae of insects, such as dragonfly nymphs, caddis fly larvae and hellgrammites. Small crayfish are also a large part of the cuisine for a youngish catfish.

As they grow and mature, the older catfish begin to expand their diet while also narrowing in on certain food types. The diet of a mature catfish, especially one of the larger species of the fish, tends to become more species specific as it grows and ages. Take the Flathead catfish as an example.

This catfish very seldom eats anything besides live fish, making it one of the most carnivorous of all the catfish types. Flathead catfish, because of their unique shape, often hide behind submerged cover—rocks, plants, etc.—and seize any fish they can get their mouths around as those fish unknowingly swim by.

The Bullhead and Channel Catfish are a bit different from the Flathead cat. While both the Bullhead catfish and the Channel catfish also search for live food, they are not known to pass up a free and easy meal consisting of a dead or decaying fish that happens to be lying near the bottom of the lake or stream.

Bullheads and Channel cats do not merely focus their efforts on fish life either. In fact, both of these species are known to catch and eat food sources like frogs, crayfish and clams in addition to their fish diet.

The season/time of year will also change the way that mature catfish eat. In certain seasons, for example, the Channel catfish will vary their food sources depending on the availability of food, eating more in seasons like spring and summer and less in the autumn and winter.

Although Flathead catfish, as previously mentioned, are strictly carnivores, the Channel catfish will almost always supplement their diet with plant life in order to achieve the proper amount of calories. This includes fruits or berries that have been dropped into the water source.

Are you thinking about raising catfish as a way to augment your regular income? This can be a very profitable venture once you gain the necessary expertise to do so.

Farm catfish, which are usually raised in a catfish-only pond that is specially built for this purpose, usually get all of their nutrition from specially formulated pellets—pellets that include the nutrients catfish need to grow up healthy and strong. These special pellets tend to include a protein concentration of between 28 and 32 percent—a concentration that closely mirrors what they would eat in the wild.

In a 2001 article that appeared in the publication World Aquaculture, a man by the name of William A. Wurts, an agriculturalist with Kentucky State University, recommended feeding farm pond catfish pellets that float when the water temperatures reach 65 degrees F or higher.

Catching Catfish: What Bait to Use

You now know that catfish can be strictly carnivorous, like the Flathead catfish, or omnivorous—eating both plant and animal life—like the Bullhead catfish and the Channel catfish. So what type of bait should you use when trying to catch one of these opportunistic feeders? Naturally, for best results you would want to cast out using a live fish for bait, but these are not always available, and in many freshwater environments it is illegal to fish with live bait.

Remember, the organs of the catfish are remarkable at picking up odors. Although they do not see well in muddy and murky waters, their sense of smell, so to speak, is off the charts, enabling them to find foods with an attractive odor—an odor that is attractive ONLY to them.

Because of this, many fishermen are known to select baits that have a strong, almost unbearable smell about them. Stink baits, such as cut mackerel or Bonita, night crawlers, crayfish, chicken liver (or the liver of other animals), stinky dough balls and even some forms of odorous cheese have all been known to work as catfish baits.

When the scent from these baits hits the water, it will spread out slowly and powerfully and thus attract nearby catfish that are feeding at the time. This tactic works very well, and can be used in either daylight or nighttime conditions.